Let's say I have a table named Orders having the following columns:

I would like to transform this table to a new table by splitting the DeptCode column into as many rows as needed:

Assume the new table is named NewOrders and has the following structure:

So, NewID is unique in NewOrders, but the other columns CustomerNo, OrderNo, OrderDate, ItemNo, QtySold will duplicate since they will come from the same row that is being split.

How do I do this? Can this be done without a cursor?

Thanks in advance for your much appreciated help!

this is just sample data and showing the way 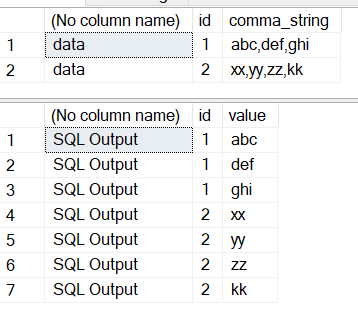 Use the DelimitedSplit8K method from the site above. All the others suck so bad they have their own gravitational field..

A better idea... instead of sifting through all that manure to figure out what the horse was thinking, ask the horse, instead. Here's the original link for the DelimitedSplit8K function along with charts and graphs to compare the performance and functionality. I can personally vouch for the author.

I will go one better

Don't build your new table this way - what you really need is 2 tables. The first table has all the same columns minus the DeptCode. The new table has the PK from this table and the DeptCode - just those 2 columns set as the PK on this new table.

In fact - instead of creating 2 new tables, just create the one new table - and use the string splitter utility already outlined to provide the data for the new table. Now you can create a view from the original table - joined to the new table that returns the data in the format expected.

In what scenario would multiple departments share the same order?

Thank you so much! I'll use the DelimitedSplit8K function as it seems to be the fastest performing option.