How to import user info from active directory in tsql

Need to pull Name Samaccount and department from active directory from TSQL any hlep would be great.

I believe there's an ODBC or similar driver that can query Active Directory, but I haven't seen anything written on it in over 10 years. I think it's layered on LDAP, and the performance is not good.

An easier way is to use either PowerShell or the dsquery/dsget command line utilities to query AD.

I don't think you can pipe dsquery output to dsget, but you can use a for construct:

You might have to clean up that data to be able to import into SQL Server. There are Active Directory PowerShell cmdlets that can most likely give you cleaner output, I'm just not familiar with them. dsget can probably get the department as well, I don't happen to know the syntax but you can run dsget -? to get a list.

Once you get the data output to a CSV or other text file you can import it using bcp or BULK INSERT.

What is the use case? there is a reason that data stays in Active Directory. 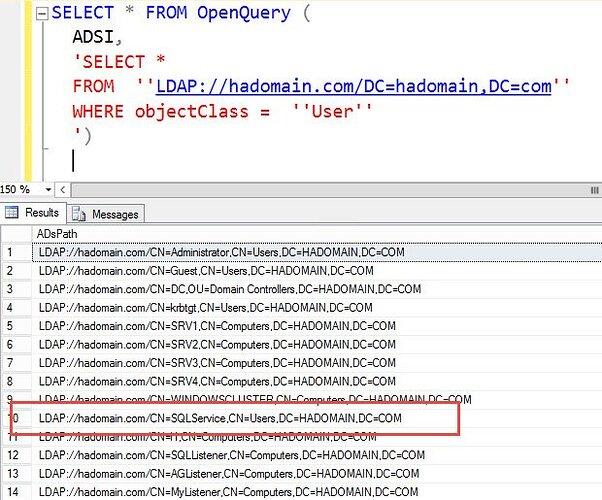 There are situations when you need to integrate SQL Server with other product. Once of the classic example was seen during my last visit to a client. They wanted list of email addresses and phone numbers for all users in the company to be fetched by...